About a month and a half ago, we had this guy show up on our back porch. We hadn't seen him before and weren't sure if he was a stray or just a new kitty on the block.

We fed him, since he seemed skinny and looking for food, but he wouldn't let us get near him. "Thank you very much for the food, but stay on that side of the door, okay?"


He came around more often and we were pretty sure he was a stray, given his appetite, lack of neutering (He's ALLLL boy, ahem) and condition of his paws and fur.

He welcomed the food and started to get used to us. Sort of. I sat on the steps and took some shots, but when I got up and got a little too close. He decided to keep his distance. "Sorry, lady, but I'm still not sure about you."

Slowly, slowly, we earned his trust. We'd sit still while he ate so he'd get used to us being nearby and not trying to touch him. Just sit and let him eat.

Then one day, after he finished eating – and drinking some delicious milk – he let us pet him. It was awesome. You know that scene in How to Train Your Dragon when Toothless lets Hiccup touch him? Yeah, it was like that. Floyd butted his head into my hand, and my heart melted. D'aww. Seriously, it was a "moment". Earning the trust of an animal that's been abandoned by other humans... well, it felt pretty darn amazing.

He's still a little skittish, but lets us pet him any time. He even purrs and rolls around like a proper kitty. He's so cute.

In fact, we just had this conversation tonight. (For reference, he's on the top of our hot tub which is on our used-to-be-screened-in back porch.) 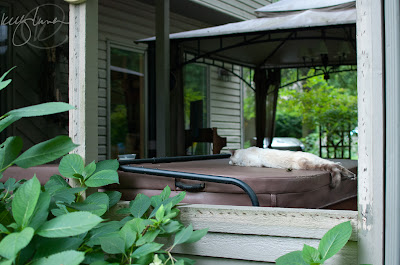 Me walking out onto the porch
Floyd: Oh, hey. Me: Mind if I take your picture?
F: Yeah, sure. Just get my good side, okay? F: Uuuggghhh, just need to stretch out a bit... Nice talking with ya, Floyd.