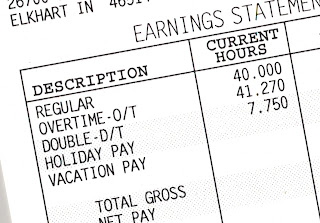 Corner of my pay stub for the week of November 17 thru 23.
89 Hours. I'm pretty sure that's a personal record. The crazy part is that 76 of those hours happened from Monday to Friday. The remaining 13 hours were spread over the weekend.

By far the hardest day was Friday. I was already tired from the 57 hours I'd worked over the four previous days. I thought the worst was behind me (us, really - Dwight ended up with 95 hours for the week). But I was wrong. By 2:10 am, I couldn't look at my monitor without feeling overwhelmingly nauseous. So I punched out (yes, I punch a clock), leaned back in my chair, closed my eyes and dozed.

Dwight was still working on his project, the one that had to get done. By 3:15, he decided it was time to go and the rest of the job would have to wait. We went home, stumbled into bed and passed out, only to be awoken 40 minutes later by a call from work. Dwight had to drive back to work to let someone in then came right back home. We slept until 10:30 which is crazy late for us, but clearly not in context. We worked only about 5 or so hours and just had to go home to crash. We got a good night's sleep and felt much better on Sunday.

We've been going like crazy ever since - not the ridiculously long hours - but long enough. I'm looking forward to a break, I just don't know when that's going to come.
Posted by Kelly at 11/28/2008

Email ThisBlogThis!Share to TwitterShare to FacebookShare to Pinterest
Labels: babbling