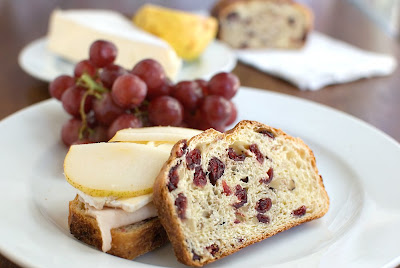 For Week 11 in the Bread Baker's Apprentice Challenge, we baked up some incredible Cranberry Walnut Celebration bread. I'm baking my way through Peter Reinart's award winning book along with 200+ other amateur bakers.Want to join in the madness, or just learn more about this semi-crazy undertaking? Check out the following links: 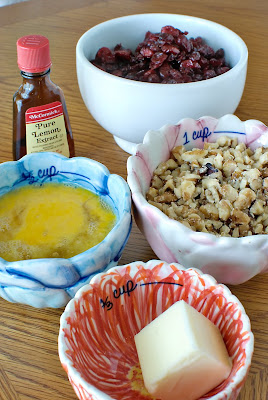 Despite its fancy name and appearance, Cranberry Walnut Celebration bread comes together fairly easily. It's a straight dough, meaning no starters need, just gather your ingredients, measure, mix and you're on your way. 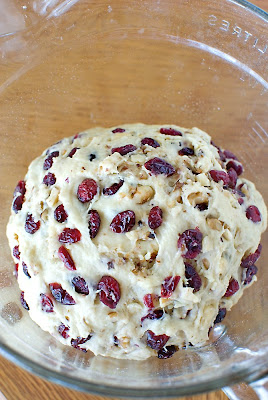 The hardest part is getting all of the cranberries and nuts incorporated into the dough. As you can see from the above picture, there's just enough dough holding the fruit and nuts together. After I finally got them all in there, first with the help of the mixer, then by hand, I popped the dough into a greased bowl and let it proof until doubled. 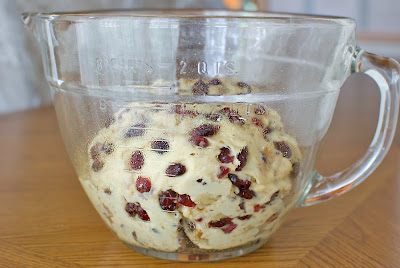 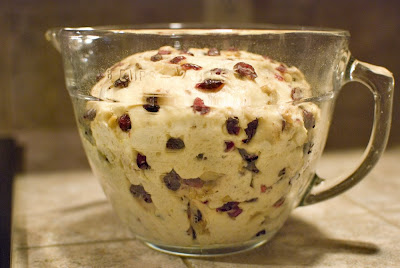 After the dough doubles, you're supposed to divide it in such a way to make two braids, one smaller than the other, then stack them, one on top of the other. I've actually made this bread before, one of the few I've made from this book before the Challenge, and I did the double braid. It was beautiful. But I had other plans for this bread and wanted to make a loaf.
So I divided the dough in half, one part for the loaf and the other was split again to be made into mini braids. 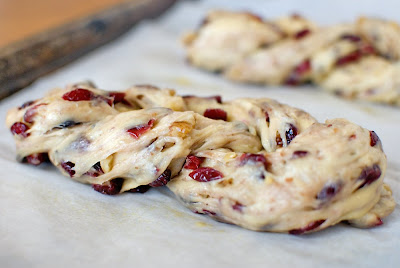 I read Michelle's post at Big Black Dog where she talked about her take on Week 9's Cinnamon Raisin Walnut bread. She changed it to Cinnamon Cranberry Bread and made mini challahs with it. Brilliant! And she posted a video showing a one-strand braiding technique. It's very cool, so I thought I'd take Michelle's lead and do the same with this bread. 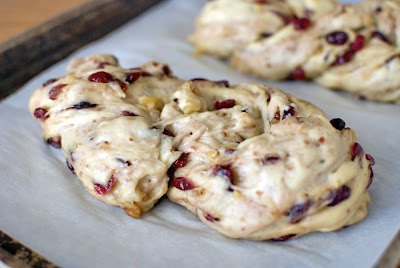 Unfortunately, because of the extremely high fruit-and-nut-to-dough ration, the strands didn't want to hold together. The dough did its best, but broke under the pressure of the final proofing. You can see in the photo above that a weak spot was exposed when it rose and fell apart. 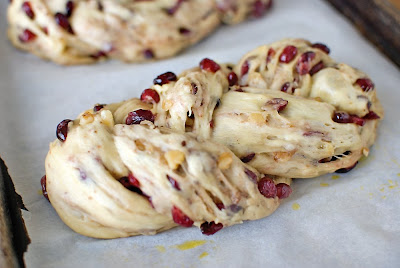 The other braid did much better and held it's shape through the proofing process. 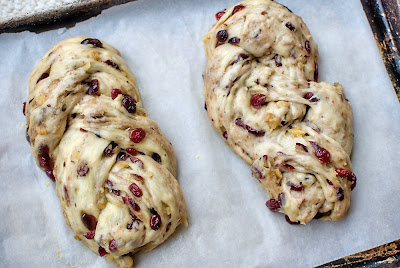 Ready for the oven... 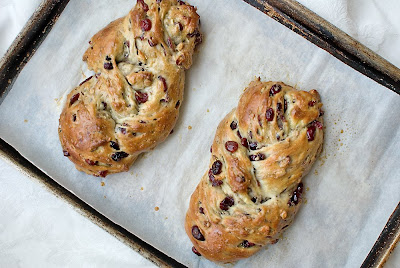 Just out of the oven...
Beautiful! And the smell?... heavenly. 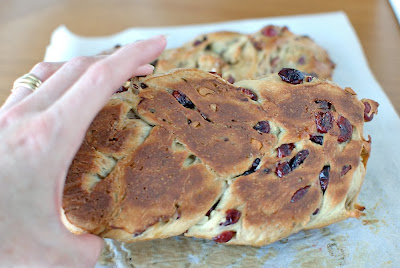 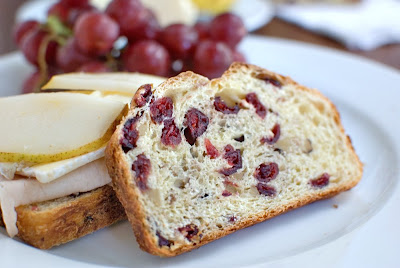 THIS is why I wanted to make a loaf.
Someone on Twitter made an offhanded comment about wishing for leftover Thanksgiving turkey to have with this bread. And I remembered a sandwich I had at a Rockefeller Center deli last fall. It was a toasted turkey and brie sandwich with thinly sliced pears between cranberry nut bread. And it was incredible. Even though I set up this shot with pear slices, I decided to go with apple slices when it came time to have the sandwich "for real," and it was just as good.
The only change I would make to this bread is cut back on the cranberries. I'm pretty sure I got an entire serving of fruit with each slice—not that it's a bad thing, but it was a little overwhelming.
No matter how you shape this bread—loaf, braid (toppled or picture perfect), or boule—it's delicious!