For whatever reason, my hometown decided to have trick-or-treating on Saturday the 30th instead of on Halloween. Turns out it was a great idea. The weather on Saturday was as good as you can hope to expect in the final days of October in northern Indiana and while Sunday's weather was decent, nothing beats having a relatively mild and clear evening for the kids (and adults) to have some fun.
We get our fair share of trick-or-treaters, and my sister and her husband take their kids around our neighborhood and have since we've lived here. I'm pretty sure this was the first time all of them stayed out until the very end. They had a great time. I decided to do a quick "costume" after seeing the no sew ideas on marthastewart.com.
Medusa! 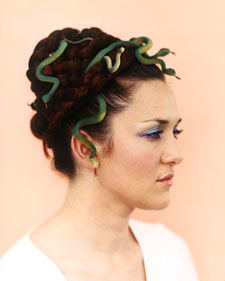 I took a chance and stopped by Dollar General on my way home. Sure enough, I found what I needed—rubber snakes and fake hair. I bought two synthetic hair pieces—the quality you would expect for "hair" that cost $2—as the instructions suggested, but I ran out of time to braid and pin the second one to my head. So what you see is my hair, braided, plus a long plait of fake hair wound around the top, with 50¢ snakes scattered throughout. It was so much fun. I got many compliments. And one girl (she was probably 12-years-old or so) wouldn't even come up to me, she was so freaked out by the snakes. Success!
I hope you all had a fun and safe Halloween and are now basking in the glow of a kickin' sugar high.
Posted by Kelly at 11/01/2010