"In The Garden" Art Show My very first art show! Well, as an adult. I did have some pieces in student shows while in high school, full disclosure.  But that was like a million years ago, so I'm claiming this as my first REAL show. Yes, it was a small one, but I was BRAVE and entered two paintings. One was selected for the juried show. I didn't ever think I would win any of the prizes, I just want to take the plunge and give it shot, you know? (And, no, I didn't win a prize or ribbon, but I don't care - I'm just so glad I did it!) 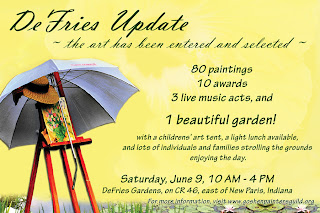 After all, I DID proclaim Be Brave as my motto, so I'd better step up to the plate. It was disappointing that Dwight's painting was not selected, especially after seeing some of the paintings that were. But all art is subjective, and just two judges did the selecting. It seemed pretty clear they leaned towards watercolors. Granted, there were a LOT of watercolor pieces in the show, so that probably had something to do with it!

The gardens were beautiful! The main area was circular divided into four wedges, each labeled with a season. In the center was a small pond, complete with lilies, goldfish and croaking frogs. My parents came along and were so proud - awww. *blush* Aren't they cute?
They had a two-story deck thing so we went up there and I got some shots of the grounds. I love the little buildings! Both the one on the left and the greenhouse on the right (you can sort of make it out in the third photo below) had paintings on display. Mine was in the greenhouse. It was perfect. I loved it in there. I wanted to dig up the entire greenhouse and take the whole thing home with me! The outer ring of the circle was paved with regular paving blocks along with bricks bearing every day of the year. There were vertical post markers at the start of each month. I'm not sure if it was supposed to be a giant sundial or what, but it was very clever and absolutely beautiful. I was so impressed with all of the gardens there. Pansies and violas - my favorites!
I didn't think to take photos of the winning pieces until a bit later, so I managed to skip right over the "Best in Show" as it was in the first booth. Meant to go back, but spaced it (it was a lovely panoramic watercolor {surprise!} of a farm).  Here are the other winners and a couple of the honorable mentions. Mine next to the 2nd place winner - it was an amazing photo-realistic
acrylic absolutely deserving of a prize! A couple of the honorable mentions
Here's to more shows and lots of fun making the pieces I'll enter next time!
Posted by Kelly at 6/11/2012