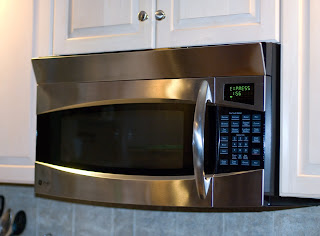 It took about 14 months, but the kitchen is finally (relatively) complete. When we bought the appliances, an over the range microwave was not in the package. We've looked at a few here and there, but decided that the old one worked fine and we'd deal with it later.

Enter Scott, Dwight's brother. He picked up this microwave for his house, but it didn't go with the rest of their appliances, so we made a swap. He took ours and we got the new one. Scott's giving ours to his oldest daughter since he found the right one for his house, so we played musical microwaves.

Isn't it purdy? Check out the top. See how it opens up when the microwave is running. That flap covers up the vent, keeping the look of the microwave very sleek. 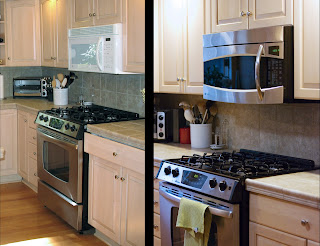 Ah, the kitchen looks complete, even though it's a bit strange to see. I'd gotten so used to the white that I didn't notice the glaring difference between it and the rest of the appliances.

And here's the real bonus. The new one fit on the same brackets and into the exact same space as the other, so no messing with the tiles. Score!
Posted by Kelly at 1/05/2009