Not what I had planned

New Year's Eve ended up being interesting, but not in any way I could have imagined. It started out right. I began party preparations as soon as I got home, setting up the buffet warmer, making chili cheese dip, beer bread and assembling the pizza bites.

Just after six, I was still in the midst of the pizza bite prep and decided to take the beer bread out of the pans. They'd been out of the oven about 15 minutes. I dumped the loaf onto the rack and the heavy glass pan it was in somehow slipped out of my hands. It happened so fast, that I can't really remember exactly how it happened. But it hit the ceramic tile counter top and shattered. "Blew up" is probably more accurate, and part of the pan, on it's way to the floor, hit my right thigh. It didn't hurt, but I knew I should check to see if any damage was done.

I looked down and saw that my jeans were slit, cleanly, like a razor cut them. I quickly unbuttoned my jeans and pulled them down. Oh holy crap. There it was. A gaping, fairly deep and about an inch and a half long gash. The blood hadn't started yet, and there was no pain, but as soon as I saw how terrible it looked, I pinched the skin together and called out to Dwight, "I CUT MY LEG REALLY BAD."

He came rushing into the dining room where I'd stepped and saw for himself. I was amazingly calm and told him to get me band aids. I sat on the couch, holding the wound together. It had started bleeding fairly profusely at this point and I wasn't sure if the first bandage Dwight handed me would even stick. It did, but I said, "I need another band aid."

I'd dripped blood on the carpet at this point. Crap. I got a second bandage on and quickly wrapped the towel Dwight brought me around my thigh.

Dwight quickly came back upstairs with a white bandage. It was one of his lifting straps, but worked perfectly. He said, "Keep the towel on" and started to wind the stretchy band. I helped wind it around and around, pulling very tightly.

I couldn't pull up the jeans over the bandage, so I went upstairs and put on my dark gray knit pajama bottoms, which easily fit over the make shift triage wrap. While Dwight tried to get a hold of my parents, I turned off the oven, unplugged the buffet warmer and grabbed the Swiffer to push the shards out of the way. I didn't want the cats stepping on it. We got our coats, Dwight left a note for my parents, unlocked the front door so they could get in, and we headed out.

We got the the hospital and quickly got through the various processes for getting patient information, and they took us to a room.

They removed the wrap we'd applied and taped me up. I was prone at this point because I was feeling really light headed. I could feel the blood dripping down my leg and was thinking about what was to come. Blood and needles make me nauseated just thinking about them.

They decided to do x-rays to make sure no glass was in the wound, so I had to wait for that. The nurse wheeled me to the x-ray room where I had 4 images taken by a totally adorable tech that looked like he was about 20 years old. Ah, you know you're getting older when you start thinking of people like this as "kids".

Since it had been forever since I'd had one, I was due for a tetanus shot. The guy giving the shot walked in with the capped syringe and I could see that the needle was GIGANTIC. Seriously, this thing was scary. I was scared. Bruce (that's the syringe-wielding dude) chatted a bit, I got my right arm out of my sweater and turned my head, waiting for the stick. I could feel him wipe the area and fiddle around a bit, but it wasn't until he was applying the band aid that I realized he'd given me the shot. Seriously. It was amazing. I instantly told Bruce that he could give me a shot anytime. I still can't get over that it didn't hurt in the least and it hasn't hurt at all since.

Then the real business began. The doctor removed the tape they'd applied and she said, "There's something black in here." Oh, great. At first we thought it might be part of the baked on bit from the pan, but then I thought of the jeans. They were very dark blue. She said they would need to scrub it. SCRUB IT? I moaned, "Will it be numb??" and they assured me that it would be. WHEW! Except, not so "whew". Numbing it — what I'd been dreading ever since it happened. Dwight held my hand and I squeezed and squeezed. I felt three shots, the last of which was the most painful, but it was over pretty quickly and I'd gotten past the worst.

She did a running stitch on the inside and 5 large stitches on the outside. Those will have to be removed by my doctor in 10 days. Everyone was SO nice and we managed to get in and out of there in very good time. I'd heard horror stories about 8-hour waits, but we were there maybe and hour and a half from walking in to walking out.

After a stop at CVS, we went home. My parents were already there, cleaning up and getting things around. Well, it turns out that Dan and Jamie, co-workers and friends had stopped by, came in and saw the note. They stayed and cleaned up the glass, put away food that was left out and even started to clean up the blood in the carpet. It was one of the nicest things anyone has ever done for me. What amazing people!

I had to toast the new year with Fresca since alcohol was off limits, between the Motrin and antibiotics. 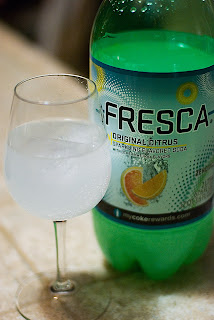 It was a New Year's Eve to remember, that's for sure. Just goes to show that you never know what's going to happen and that I'm so grateful it wasn't worse. I survived and will be just fine. My jeans, however, will never be the same. 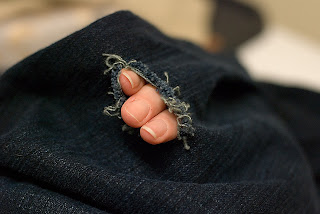 My jeans, after being washed—they weren't frayed when it happened.
Posted by Kelly at 1/01/2009