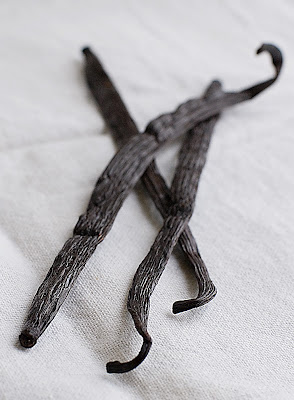 When it comes to the "chocolate vs vanilla" debate, I quickly respond, "CHOCOLATE." It's so rich and decadent. At any given time, in any given recipe, it can be bold, mild, sweet, bitter, gooey, crisp–the possibilities are endless.
Vanilla is just so... vanilla.
Except, what would I do without vanilla for nearly all of my baking? What's my go-to flavoring? Why vanilla, of course. So the "chocolate vs vanilla" debate isn't quite as clear cut as it seems.
Thankfully, I don't have to choose. And thanks to an unlikely source (or so it seemed to me), I've been able to delve even further into the world of vanilla. At some point during a stroll through the foodie blogosphere, I stumbled on a discussion about vanilla beans and learned something invaluable in the comments. Someone mentioned that they buy their vanilla beans on ebay. 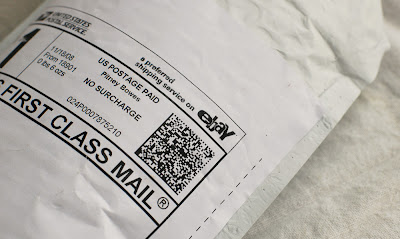 Ebay? I guess I shouldn't have been so shocked. You can find literally anything and everything on ebay, so why not vanilla beans. I'd never used them before, but wanted to for a long time. There just terribly expensive at the store. If memory serves, I found a bottle of THREE for something like $7. The way Martha Stewart and similar celebrity chefs/bakers call for them, you'd think they were a dime a dozen. The cost was just too prohibitive.
Until ebay. Just do a search and you'll find a number of wholesalers out there. I found and bought 1/4 pound Grade A (whatever that means) Madagascar bourbon beans — with shipping — for less than $18. And they threw in a free 10 pack of Tahitian Grade B beans. 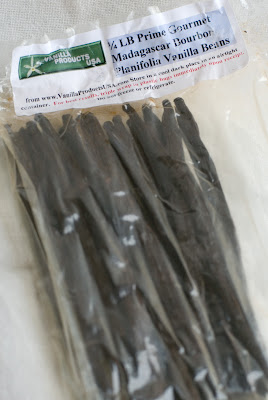 Since the concept of a quarter pound of beans is rather abstract, I guesstimate that there were a good 40-ish beans in that package. According to the listing, there are approximately 100-120 beans per pound. I'm sure I had way more than 25 beans in the package. I probably have that many left after using I-don't-know-how-many since I bought them back in November.
I've used them in homemade coffee liqueur, homemade Irish cream, countless baked goods, and the coolest — homemade vanilla extract. YES! You can make your own. Google "homemade vanilla extract" and you'll find various recipes. The easiest is what I did — put some vodka in a jar, add beans, and let it steep for a few months. Voila! 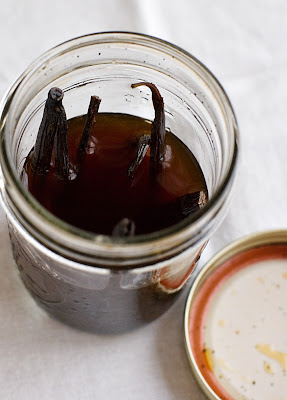 I have two jars going right now so I won't have to be without it when I use up the last of this jar. The cool things is that, as you use the bean, extracting the seeds for various recipes, you can pop the "empty" pods in the jar of extract. No need to waste, there's plenty of delicious vanilla-ness left in the pod, certainly enough to help enhance the extract. 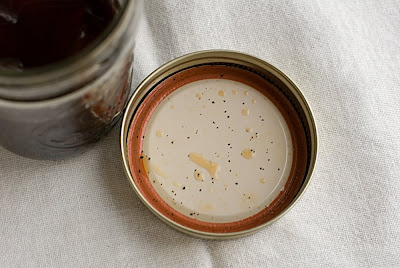 See those black flecks? Those are the seeds. You can't believe how good this smells!
If you've ever wanted to bake or cook with vanilla beans but didn't because of the expense, I highly recommend ebay!

Now for a recipe! 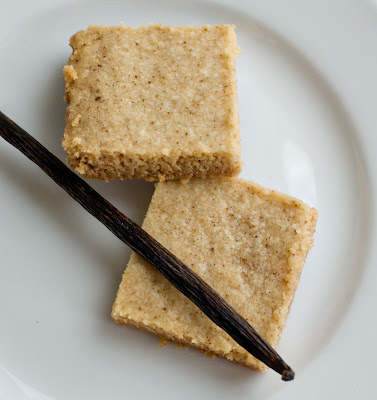 I had a hankerin' to make something with my beans and wanted to make some sort of shortbread. After a quick search, I found a recipe from Cooking Light. I made some minor modifications to come up with the following. Original recipe here.

Browned Butter
Directions from Smitten Kitchen
Cut butter into four or five pieces and cook butter in a small heavy saucepan over medium heat, stirring frequently, until it has a nutty fragrance and flecks on bottom of pan turn a light brown, anywhere from 4 to 7 minutes. It helps to frequently scrape the solids off the bottom of the pan in the last couple minutes to ensure even browning. Transfer butter to a bowl and chill until just firm, about 1 hour.

2. Line bottom and sides of a 13 x 9–inch baking pan with foil; coat foil with cooking spray, and set aside.

3. Weigh or lightly spoon flour into dry measuring cups; level with a knife. Combine flour, cornstarch, and salt in a large bowl; stir with a whisk.

4. Place butter in a medium bowl; beat with a mixer at medium speed 2 minutes or until light and fluffy (since you've altered the butter by browning it, this butter won't act the same as it would if it were just softened). Add oil; beat with a mixer at medium speed 3 minutes or until well blended. Add extract. Gradually add sugar, beating well. Scrape seeds from vanilla bean, and add seeds to butter mixture; discard bean (better yet, put it in your extract!). Add flour mixture, beating at low speed just until blended. Spoon dough into prepared pan. Place a sheet of heavy-duty plastic wrap over dough; press to an even thickness (I used an offset spatula instead and it worked great). Discard plastic wrap. Bake at 350° for 30 minutes or until edges are lightly browned. Cool in pan 5 minutes on a wire rack; cut into 32 pieces. Carefully lift foil from pan; cool squares completely on a wire rack.

p.s. I just thought of something else you can do rather than discard the bean from this recipe. Put it in a container with sugar. You'll infuse the sugar with all of the flavor and scent of the vanilla bean–heavenly!
Posted by Kelly at 5/03/2009