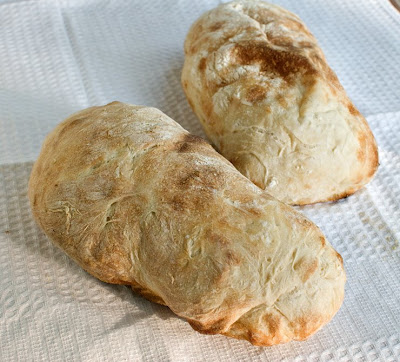 This week's recipe for the Bread Baker's Apprentice Challenge offered a departure from the rich, eggy breads we've been making—brioche, casatiello, and challah. We switched gears to a lean dough—ciabatta. There were options in the book to add milk and/or oil, so it's not a strictly lean formula, and there are directions for adding cheese, wild mushrooms or onions if you're so inclined. I decided to stick with the basic formula since this was my first time making ciabatta.

I was nervous about making this bread long before it arrived on the schedule. Because it's new and because it's a wet dough, I was pretty certain I was going to be challenged by this bread. I did learn a few things ahead of time by reading the accounts of those who have already made the bread. But it's hard to know how it's all going to come out until you don the apron, mix up the dough and put it in the oven. 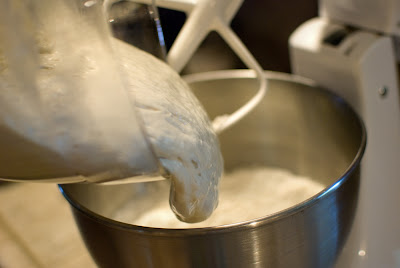 The poolish going into the the rest of the flour, yeast and salt. 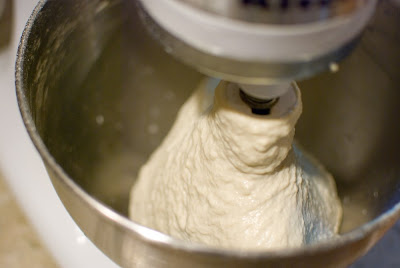 The dough prep and mixing went along uneventfully. I'd mixed the poolish (pre-ferment of water, flour and a bit of yeast) Thursday night and finished up on Saturday afternoon. The dough was nice and soft and smooth, but wasn't as wet as it probably should have been, but without having made it before, I was kind of guessing about the whole process. 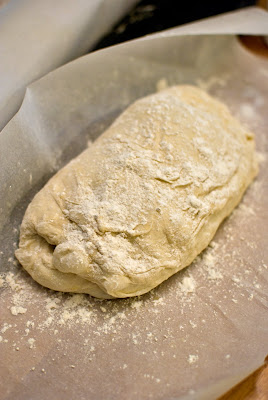 I went through the whole song and dance of stretching and waiting, and shaping and waiting and finally THE BAKING. Here's where things got interesting.

Now this bread is supposed to bake at a whopping 500°F, at least to start. Since the A/C was already running like crazy trying to keep up with the heat outside, I decided to skip the oven and head to the grill. I've made pizza on the grill and have read a number of recipes showing how to bake bread on one, so I thought I'd give it a shot. 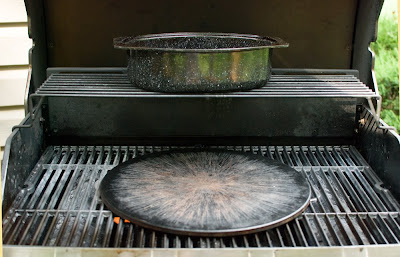 My round pizza stone is so *ahem* seasoned — that is, completely black — that it's best to use on the grill anyway. It smokes like crazy and about the last thing I wanted, on top of a blazing hot oven in 90° heat, was the smoke alarm going off repeatedly. I popped the stone in the center of the grill, placed a pan on the rack above it for steam and hoped for the best. 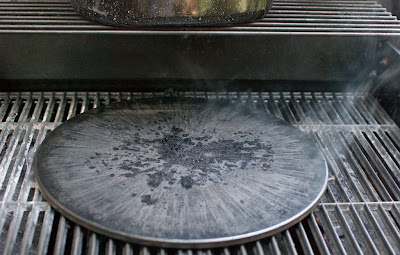 I think it's ready. 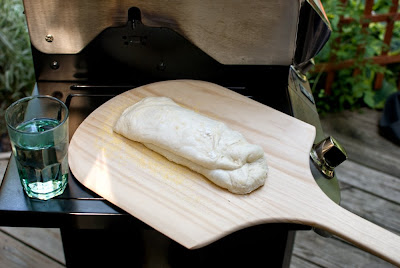 Ooh! My first time using the pizza peel. So exciting!

Unfortunately, here came my first big mistake. I overheated the grill. If I'd been making pizza, it would have been great. But for a loaf of bread? Not so much. I knew it would lose heat when I opened the cover, slid on the bread and poured water into the pan, but I didn't bank on it getting right back up to it's previous temp— a whopping 100°F hotter than it should have been. 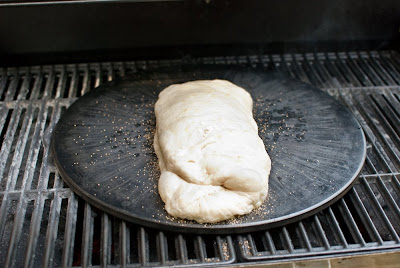 And I'm shocked that the first loaf burned, why? 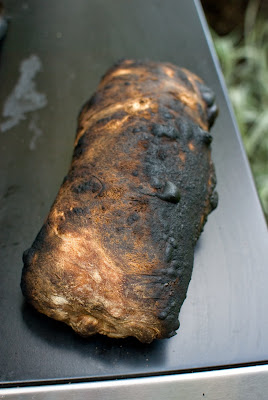 Yeah, I totally nuked that bread. On top of the scary-high temperature, I didn't pay attention to how long it'd been on the grill. When I finally waltzed out to check on it, the smell of burning bread hit my nostrils. I opened the lid and gasped. Oh, s&^%. I was greeted with a black and smoking loaf of bread. Who ordered the blackened ciabatta? Anyone? 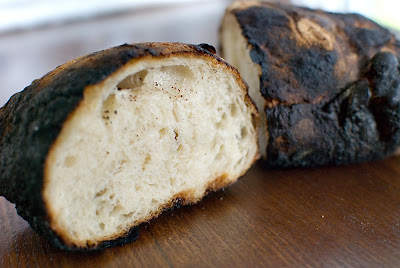 SURPRISE. The innards were actually edible.

On to loaf #2. I still hadn't learned from my mistake at this point, and didn't turn down the burners. I was thinking I'd just left loaf #1 on too long. I was better about checking on #2 and ended up with a lovely looking loaf. It was getting slightly burnt on the bottom, so I FINALLY decided to turn down the burners. On goes loaf #3. It is also rather lovely. Turn off the grill and call it a night, baking-wise.

I didn't cut open the non-charred loaves until this morning. That's when I discovered yet another mistake. Loaf #2 was raw on the inside. Crap. Loaf #3, however, was done through. Whew. One out of three—not the greatest record. The bread didn't have the big holes it's supposed to have, but I wasn't really surprised. I was pretty sure right from the start that my dough wasn't wet enough for the proper crumb. 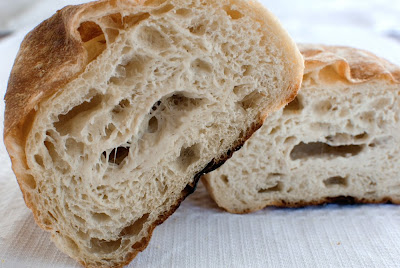 Ew. Check out the center of the loaf. Raw dough. Blech. 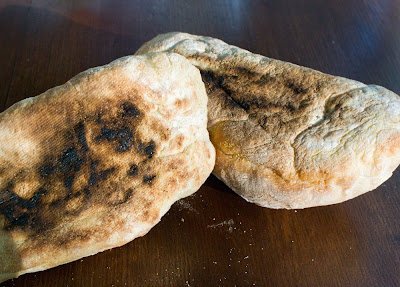 The bottoms got a bit crispy. 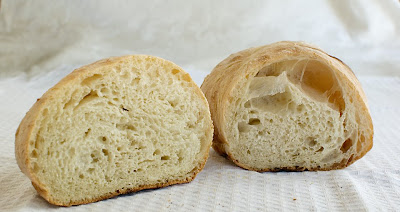 Looks more like French bread, doesn't it? I did manage to get one big air pocket in the top.

As far as the taste goes, I have to confess a few things. First, I really don't know what it's supposed to taste like. I don't buy ciabatta bread and I can't remember if I've ever even had it. Yeah, I know. I live under a rock or something. So I don't know how to judge the taste, but to me, it's pretty blah. I suppose it would be better if it were dipped in olive oil and herbs, but plain? I'm underwhelmed.

It was definitely a learning experience for me and I'm glad I did it. I knew I wouldn't get it perfect the first time, so that doesn't really bother me. All I can do is keep learning and apply that to the next challenge. That's what this is all about, after all. If I already knew what the hell I was doing, why would I need this book—and challenge—in the first place!