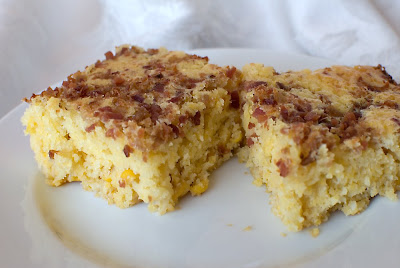 Corn Bread was on tap for Week 10 in the Bread Baker's Apprentice Challenge. Want to join in the madness, or just learn more about this semi-crazy undertaking? Check out the following links: 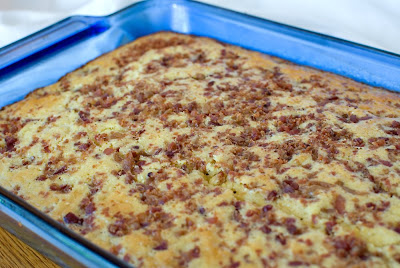 So. Corn Bread. It's the only quick-bread in the book, the others made with either commercial yeast, wild yeast starters, or both. I really wanted to like this. Really. I love cornbread. I love corn casserole. And this seemed to be a combination of the two, so I had high hopes.

To be perfectly honest and in the interest of full disclosure, I did make some short cuts. The recipe called for fresh or frozen corn. I used extra-crunchy canned corn. It also calls for bacon that you cook in the oven, cool and crumble for the top. You're also supposed to collect the drippings to use to grease the pan. I did neither. I used Hormel Real Bacon Pieces. I tend to have them on hand because they're perfect for a quick breakfast bake or to just throw in some eggs or toss on a salad, so I figured they would do the trick and save me a step.

I also spaced using my cast iron skillet. Damn it. I really meant to, but I was kind of going through the motions with this one and grabbed my 9x13 glass pan instead. The recipe calls for a 10-in cake pan, which I don't have, but you can also use a 9x13 pan or a 12-inch square pan—which I also don't have. 9x13 it is! Except I meant to use the skillet. Gah.

But despite all of these substitutions and goofs, they're not what made this a bust. I'm pretty sure it was the baking powder. I took a bite and thought, "Mmm good. Wait. What is that taste? Salt? No. Not salt. Hm." Chew, chew. "It's bitter. Ugh. It's got to be the baking powder." There's a TABLESPOON and a HALF in this. Could my powder be bad?

One thing I noticed after mixing the dough and pouring in the pan, is that it was bubbling, like a chemical reaction. Which is exactly what it is, of course. Baking powder and soda are chemical leavaners and this bread has both. I just thought it was really odd that it bubbled like it did, like how baking soda bubbles when you add vinegar. Well, not that vigorous, but the same priciple.

ANYway. This just didn't do it for me. I had half a piece and took the rest to work. I usually have no problem unloading leftovers at work. Dwight jokes that we could slather frosting on an old shoe and it would get eaten, but not all of the corn bread. There were two large pieces left at the end of the day. This one is a definite thumbs down for me. I won't be making it again. There are too many other recipes out there that taste great.
Posted by Kelly at 7/27/2009