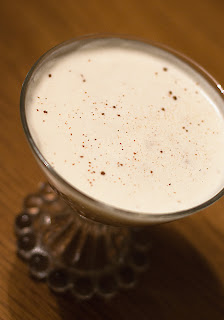 Dwight decided that he wanted to make eggnog this year—from scratch. He hates the store bought kind, so I was a little surprised at his interest. When I saw the recipe, however, it became a bit more clear. This stuff is lethal.

He found the recipe—and a pretty great video—on NPR. The story, "More Evidence That Eggnog Goes Better With Booze", discusses the issue of salmonella, seeing as eggnog is made with raw eggs. Turns out that there's no need to worry, at least with this recipe. The folks that dreamed it up are microbiologists and work in a lab. They tested the homemade stuff against the store bought, non-alcoholic variety and determined that, even when you add salmonella to the homemade version, the alcohol kills it. Nice.

Because of the ingredients and the way they are mixed, this stuff is almost like ice cream. Check out the gorgeous layer of cream that comes to the top of this mixture. It's insane. Insanely delicious, that is! 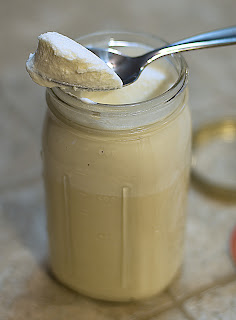 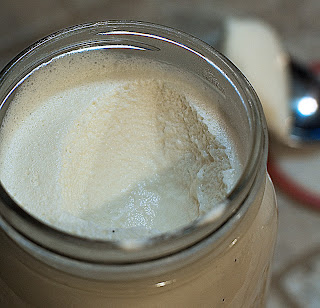 (Of course, you stir it up before consuming, but I just had to show how thick this stuff gets.)

So grab your cholesterol meds, schedule a month's worth of personal trainer sessions and give this recipe a whirl. I promise you'll love it, even if your heart won't.

Beat eggs, add bourbon and rum slowly with stirring to prevent precipitation of egg proteins. Beat heavy cream separately until it peaks and add to the egg/bourbon/rum mix.

Add the light cream with stirring. Add the sugar to taste with mixing, then add nutmeg to taste.

Leave standing at least overnight with lid slightly ajar in refrigerator. Serve after 2-3 weeks in the cold. (Or consume it immediately as we did!)
Posted by Kelly at 12/27/2008

Email ThisBlogThis!Share to TwitterShare to FacebookShare to Pinterest
Labels: recipe