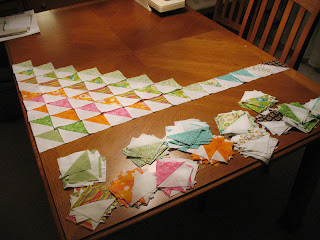 What a great Sunday. The sun came out for a little while, I didn't have to work at all, and I made a lot of progress on the quilt. I got all of the squares assembled and pressed, then it was on to the layout.

I cleared the dining room table and went to work.

I kind of liked the first attempt but didn't love it. I got Dwight's opinion and tried out a couple of other options. Instead of the linear setup, I tried a 12-block repeat. I liked it, but thought the half-white, half-pattern blocks looked better in a linear pattern, but decided it needed to be more of progression of color than the first attempt. 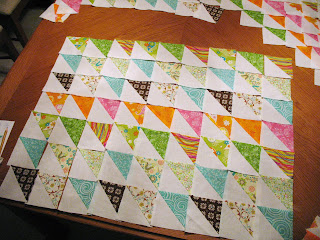 I bought these particular colors and patterns with the thought of them transitioning from one to the next and I think the revised attempt was much more successful.

But then I took a look at the pictures, and the row of brown squares really jumped out at me. I removed them and simply shifted the rest over and BAM! I had it. Not hugely different than the first, but enough that it's just what I'm looking for. 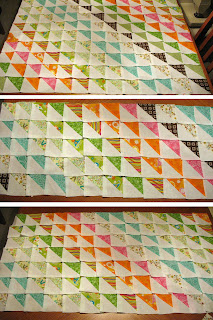 Top: First layout
Middle: Better progression, but the brown is just too dark
Bottom: I think we've got it!
Next step: sewing all of these bad boys together!
Posted by Kelly at 12/07/2008

Email ThisBlogThis!Share to TwitterShare to FacebookShare to Pinterest
Labels: crafts