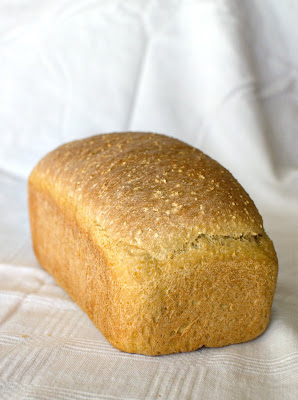 First, a little background. This challenge began with a casual comment by Nicole of Pinch My Salt. About three weeks ago, she decided to bake her way through the book and posted her thoughts on Twitter, asking if anyone would be interested in joining her. Much to her surprise, like-minded bakers chimed in, eager to join her challenge. From there, it exploded. I happened to find a reference to it in my foodgawker feed. I clicked on the link and was instantly drawn to the challenge, and was thrilled to see that the deadline for joining was that day—seredipity.

Today was the final day for Anadama bread, the first of 43 breads the Bread Baker's Apprentice Challenge group is baking. I won't be posting any recipe today or for any of my BBA posts due to the group's repect for copyright laws. Feel free to Google any bread name to find other recipes out there, or check your local library for a copy of Peter Reinhart's book. If you're really interested in learning about bread baking and not just looking for a recipe, this is a great resource.

Because I was baking last minute, I was able to read the notes from other BBA bakers and I started to get worried. I was wondering if I would have falling loaves, as others did, or if the taste would be just "eh." I had a few moments of doubt along the process. I had to add quite a bit of flour when I kneaded the dough. I also worried about the temperature of the dough. According to the book, the dough should have been between 77° and 81°F. Mine was about 71°F. Ack! Also, I never achieved a "windowpane" when stretching the dough, not even close.

So I was a little concerned. But I finished the kneading and popped it into the greased bowl for it's first rise. It looked great. Whew. I dumped it onto the counter and cut it roughly in half. In comes the kitchen scale. I weighed the pieces, shooting for 24 oz. The recipe was supposed to make 2-24 oz loaves or 3-16oz loaves. I planed up making 2, but ended up with some extra, so I made three - one at 24 oz, one at 16 oz, and the leftovers as the third.

The verdict: the loaves rose beautifully, baked great (and in about half the time called for), and tastes wonderful—soft, flavorful and a bit crunchy. Simply delicious!

Here are some images from the process. 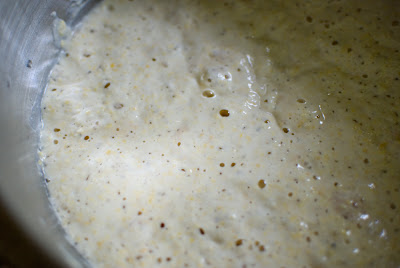 The "sponge"—it was bubbling as I took pics! 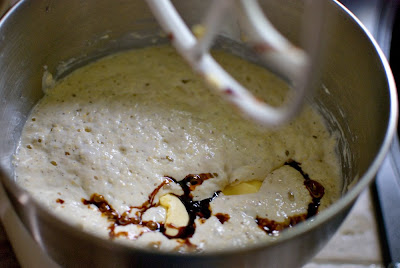 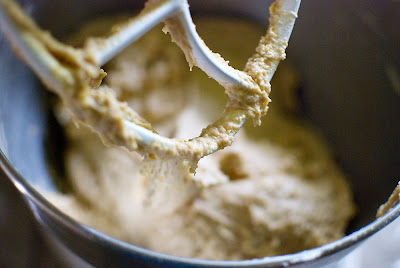 After adding the flour and getting ready to knead. 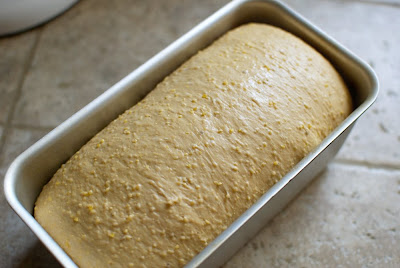 After the final rise, ready for the oven. I was supposed to dust with cornmeal, but forgot—oops. 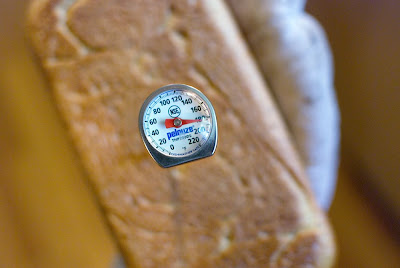 Checking for doneness using an instant read thermometer. Not quite there, but very close. 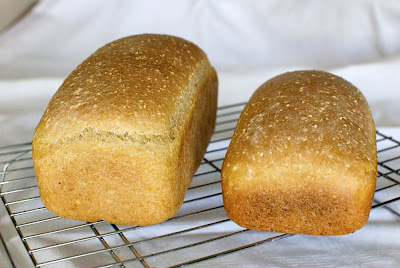 The 24 oz and 16 oz loaves. The "leftover" loaf had already been consumed!
The 16 oz went home with my parents.

Perfection.
Did I mention that I love making bread?

p.s. I used AP flour—I didn't realize I was all out of bread flour. Didn't seem to adversely affect the bread.
Posted by Kelly at 5/17/2009