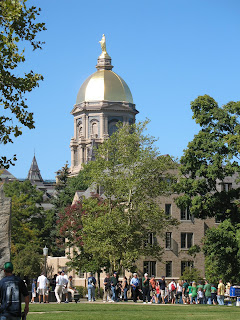 So the game on Saturday was great. ND beat the pants off Purdue. Well, that might be a stretch, but they did win handily (38-21) and had some awesome plays along the way. I mis-remebered how long it had been since I'd been to a game. Dwight was still working at Ave at the time, so it's been at least 9 years. My how time flies.

Generally heat is not an issue at a football game, especially in northern Indiana at the end of September. But there seems to be a least one each season, and we managed to hit the scorcher this year. I wish I knew what the temp was in the stadium. The regular temp was supposed to hit about 80, but it felt about 10 degrees warmer in there. Thank goodness for sunglasses, visors, sunscreen and water. 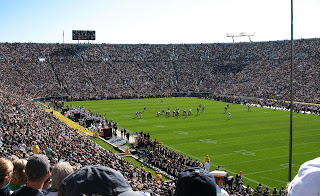 Full House
Unfortunately, some people weren't as prepared. During the first quarter, a woman passed out as she was trying to walk down the stadium steps, presumably to take a break in the shade and coolness under the stadium. Our seats were right on the aisle so we saw it all first hand. Fortunately, she was caught before she fell and many people rushed to help. Dwight and I both grabbed a water on one of our breaks below deck, so I thrust one into her friend's hands. She was convulsing slightly as she was unconscious, which was pretty frightening. A woman from across the aisle quickly came over, took the other woman's pulse, asked her questions and generally tried to get the poor girl to respond. She did revive and drank the water that was left after the'd poured some over her head. The first aid guy arrived along with a cop and between them and her friends, she made it safely down. I hope she was OK. She was so pale and clearly in serious distress. It was just so damn hot. 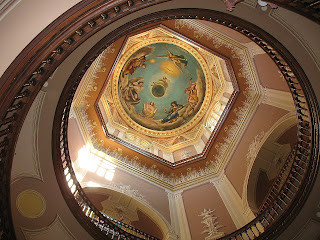 Interior of Main Building
But the campus was beautiful and the game was fun—the students totally crack me up when ND scores. A BUNCH of them get hoisted in the air and do "push ups" with other students holding them up. It was quite a sight. 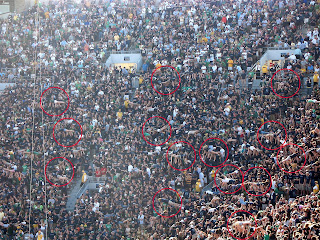 Student Section - Click to enlarge to see all of them doing push ups
Oh, and someone in our section had a leprechaun puppet that they waved around after a score or good play. They had it doing push ups, too—hilarious. 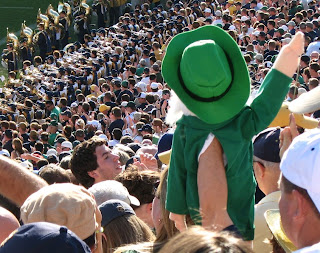 I was really glad we got to go. 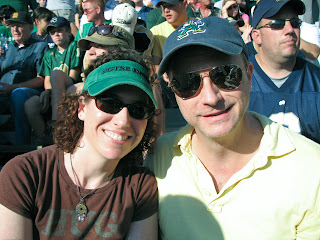