Click on image for larger view
It's time to go back to the library. I'll probably check out a few new books, but these are on their way back, ready for another eager baker.

I've already posted about Artisan Bread in Five Minutes a Day. I made a total of three recipes from this book, and my favorite by far, was the challah. My latest recipe is sitting in the fridge right now. 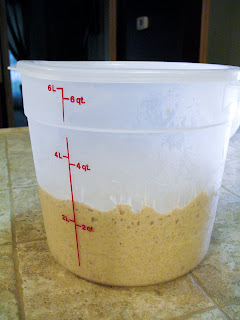 It's a combination of a couple of recipes, incorporating whole wheat flour and wheat bran. The dough is drier than I expected and it is very dense. I think I need to let it rise longer than normal after shaping. After almost 2 hours, my first loaf didn't double in size as I'd hoped. Hopefully I'll have better luck with the next batch. 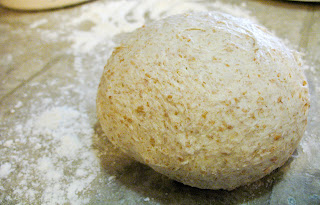 Unfortunately, I only made one recipe from Dorie Greenspan's Baking: From My Home to Yours
Chunky Peanut Butter and Oatmeal Chocolate Chipsters 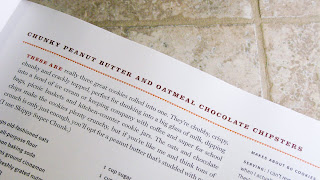 They're "three great cookies rolled into one" and sounded darn good. In fact, they were a recent Tuesdays with Dorie recipe selection.

I mixed them up on Sunday and popped the dough in the fridge to chill per the directions. I was telling my husband about them, describing all of the yummy ingredients, and it hit me. "I think I added too much butter," I said. 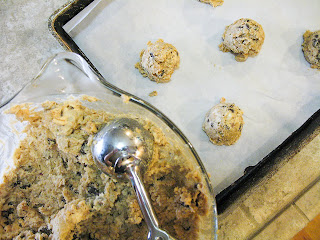 Too much butter — I'm pretty sure those words shouldn't be used in the same sentence, unless they're proceeded by "There's no such thing as".

On Thursday, I was finally home in time to bake the cookies. I was a little unsure how they'd bake up given the *ahem* enhancement I'd made to the recipe. It was both predictable and surprising. They spread out quite a bit, which was the predictable part, but I hadn't counted on the change in taste. I guess I should have, given the ingredients. Butter + sugar + heat = caramel. In this case, an almost toffee-like flavor. YUM! 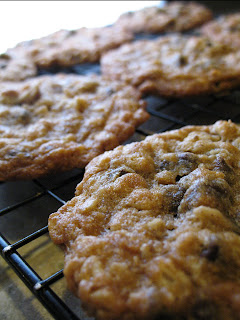 The additional surprise discovery was made the next day. The cookies were soft and chewy, not crispy as I expected. My guess is that, since butter isn't the only fat in the recipe (there's 1 cup of peanut butter, too) the chemistry changes, in turn changing the consistency.

Now for the REAL issue—how do they taste? 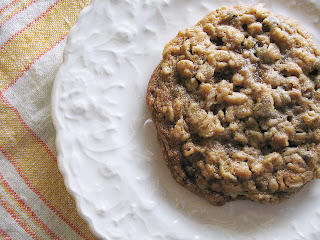