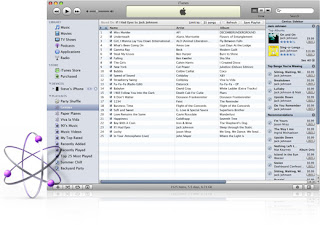 iTunes recently released version 8 and my husband, being the techno savvy guy that he is, immediately took advantage of its new features. One of the coolest and most hyped is something called "Genius". With it, you have a new sidebar that suggest songs you don't own based on the one you're playing at the moment, under the guise of "introducing you to new music" when we all know they're really "wanting you to buy a bunch of new songs."

The best part though, is the "Genius Playlist". You pick a song and click on the Genius button—it's in the bottom right corner and looks like an atom illustration. Genius looks through your library of music and grabs songs that are similar to the one selected. Obviously the larger your library, the more varied your Genius lists will be.

Dwight has a lot of songs in his library. And by "a lot" I mean like A LOT a lot. To put it mildly. He loves music and is constantly picking up new songs, making playlists for parties, for running or just hanging out. What prompted me to post about this, though, is the list playing right now.

He picked Witchy Woman (or "Witchaay Woman" if you prefer) and let Genius put together a playlist. OMG, it's so great! More Eagles songs of course, like Heartache Tonight, but also Fat Bottomed Girls, Hungry Like the Wolf and Rosanna.

It's got Eric Clapton, CCR, Elton John, Blondie, Alanis Morissette, Matchbox 20, Police and Fleetwood Mac, among others. He is SO burning me a copy of this playlist!